Schooldays on Show at Earlston Primary 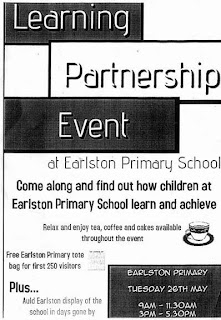 The Auld Earlston Group was delighted to take part  in the recent Learning Partnership Open Day at Earlston Primary School.

A photographic display was created of  schooldays past, together with pictures of wartime Earlston, the  railway era  and the Simpson &  Fairbairn Mill.  Visitors could also watch  a lap-top slide show and browse through the albums of press cuttings on Earlston.

The Auld Earlston displays attracted many favourable comments  and was one of many stalls by partnership agencies present in the packed school hall to highlight how children learn and achieve.


We look forward to working with the school on future projects. 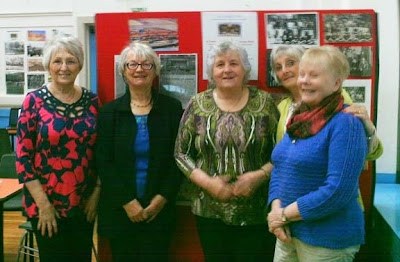 Auld Earlston is grateful to Earlston Horticultural Society for getting in touch with this report and photograph  on their show of 1932.  It was regarded as "the finest which had been held for a long period of years" and ended in the evening with a dance to music by the Nenthorn Jazz Band.    Read on below...... 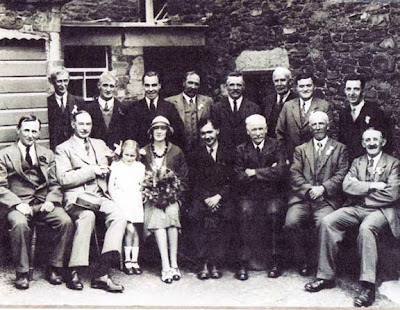 The Earlston Horticultural Society Committee with the Countess of Lauderdale, who opened the show and Miss Mary Betts (Nurse Betts) who presented the bouquet (the picture is taken at the side door of the Corn Exchange, the site of which is now occupied by Hanover Close).

Held in the Corn Exchange, the opening ceremony was performed by the Countess of Lauderdale.

Major R.W Sharp, of The Park, presided, and a large attendance of the public was present. In his introductory remarks, Major Sharp said it was a great privilege to introduce the Countess of Lauderdale on the first occasion she has attended a public function in Earlston. They all hoped it would not be the last. He noticed that since coming to reside at Thirlestane Castle, the Countess had been taking a great deal of interest in her home town of Lauder. He hoped she would extend her interest to include the sister town of Earlston.

The Countess thanked Major Sharp for his kind words, and expressed her pleasure in coming to the show. She was taking every opportunity of meeting her neighbours. The Earlston Show was one of the great functions of the year, and was reckoned as one of the best in the Borders. The standard of the exhibits had always been high, and from what she had seen it was higher than ever this year. The countess was only starting her gardening career, and was somewhat of a novice, but she was hoping to get a few tips today, and probably next year she would come back as a competitor and clear the decks. There is nothing better for people than taking a great interest in their gardens, and the Society was giving encouragement in this direction. She was pleased to see that the young people were being encouraged, and it was gratifying to see their splendid exhibits. She had much pleasure in declaring the show open, and wished it all success in the future.

A lovely bouquet was presented to the Countess by Mary Betts, the youthful daughter of one of the chief exhibitors. On the call of Mr Tom Bradford, a cordial vote of thanks was given to the Countess of Lauderdale, and also to Major Sharp.

The  report in The Border Telegaph" noted that the show was one of the finest which has been held for a long period of years. No doubt the season has been favourable for horticulturists, but several young members have begun to take an interest, and their exhibits were extraordinarily fine. The vegetable section has always been a feature of the show, and this year was no exception, and in all classes competition was very keen. J.R Hope, of Wester Housebyres, a new exhibitor staged a lot of splendid vegetables. For a year or two the cut flower section has been rather weak. On the present occasion,  the reverse has been the case, as the exhibits would have held their own in shows of a larger size. The outstanding features were the sweet peas shown by John Johnston, Carolside, who again won the cup presented by the Countess of Lauderdale, and the gladiolii shown by Willie Brockie. The latter gentleman had some very magnificent spikes. Pot plants were, as usual, somewhat limited in competition. Fruit was scarcely up to the best standard, but the industrial section upheld its honourable place.

During the afternoon the show was well patronised. Musical sections were provided by Mr Fisher’s Orchestra. At the close of the show,  a dance was held, for which the music was provided by the Nenthorn Jazz Band. A great deal of the success of the exhibition was due to the untiring work of Tom Taylor, secretary, and George Graham, treasurer.


Earlston Horticultural Society would like to thank Mrs Margaret Wilson, for providing the photograph and report featured.

The Society continues  to be active in the village with an Annual Plant Sale and Coffee Morning mid May and its Annual Flower Show held on the last Saturday in August.

In the vintage photograph below,  the Pipe Band leads a procession along Earlston High Street in 1908 to mark the "Semi-Jubilee" of the local Temperance Society. 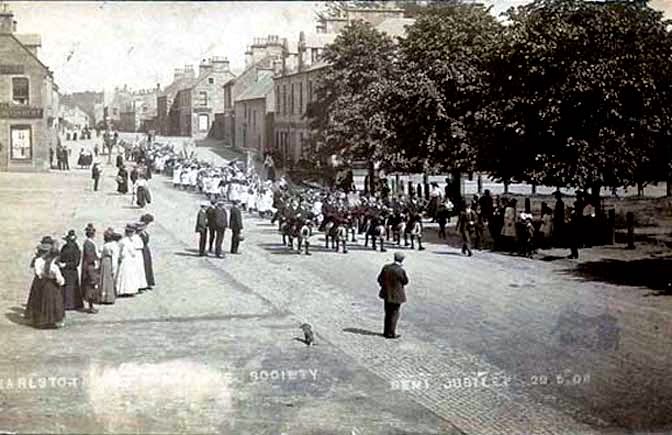 The Scottish Temperance Movement was founded by John Dunlop of Glasgow. concerned at the high level of consumption of spirits. He established an anti-drinks society in 1829.  For Dunlop a vital first step was education and social improvement.

A more radical approach was adopted by William Collins, a publisher and evangelist,  who favoured total abstinence.   By 1831, the Scottish Temperance Movement numbered 44,000.   Local abstinence societies. often linked to religious denominations,  were formed and many of these offered classes and concerts as alternative entertainments. National groups also began to be established, with branches opening in many areas of Scotland, with the Band of Hope targeting  children to "Take the Pledge".

By the close of the 19th century, the temperance movement was strong with Victorian morality  linking   drunkenness with ill-health, poverty and misery - an image often portrayed in Temperance literature.

The movement's cause to cut excessive drinking  found favour in parliament with the passing of  the  1853 Licensing (Scotland) Act.  This prohibited Sunday drinking, except by bona fide travellers who were allowed to buy alcohol.  Of course some locals seized the opportunity in this loophole, by travelling  to neighbouring towns and villages to buy a drink.

Temperance activity in Scotland peaked with the passing of the The Temperance (Scotland)  Act 1913  which gave voters in small local areas the right to hold a vote on whether their area should be "Wet" or "Dry".

The First World War, however, meant that more pressing matters were the focus of the country and the Temperance Movement went into gradual decline, though abstinence pledges were still being signed in the 1940's.


Do you have any recollections of the Temperance Movement in Earlston.
Did your parents or grandparents sign the pledge?
Do share your memories by writing in the Comments Box below.

Auld Earlston is committed to remembering the heritage of our village for future generations - and here is something that bit different from  recent history.

The history of Earlston Golf Club, founded in 1906, featured in the last blog post HERE. Although its course never reopened after the Second World War, the Club itself continued playing on other courses.

But in  November 2000, the  club launched a new initiative to pursue the purchase of land to build a  course on the moon and called for Moon Course Associate Members - as described on its web site HERE.
"The holes on the Earlston Golf Club are named to keep the authenticity of the course location whilst ensuring that the history and traditions of the Club are echoed in the Course.
There are 18 Seas on the surface of the Moon, each of which has a Latin name which has been translated and given a Scottish Borders flavour to reflect the origins of the Club." 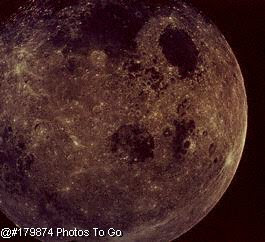 "As a result, the Club has featured in newspapers and magazines, on TV and on the web world-wide. It featured in Robert Duncan's 2003 Canadian TV documentary, "Golf - The Ridiculous Obsession".


There are now has around 70 local members who play in competitions throughout the Scottish Borders and the Club is expanding its presence around the world with Moon Course Associate Members in the USA, Canada and Australia.

Preliminary negotiations have been opened with NASA, RKA and ESA, the US, Russian and European Space Agencies respectively, to provide transport to the course. The Russians have thus far provided the cheapest offer".

A First for Earlston!