If you think major crime in Earlston in Berwickshire  is rare, things have been relatively quiet for the last two hundred years, apart from two murders and a public hanging.

Many people know about the 1877 murder, when Euphemia Johnstone, the landlady of the Commercial Inn, was killed by a shotgun blast at six yards range by her husband John. Although he claimed it was accidental, he was found guilty and served fifteen years hard labour in prison.  However few people know about the double murder in 1823 which led to a public execution on a gallows near Fans.

In the 1800s Earlston Fair was an important day. Farm labourers and farmers walked about the Square and negotiated deals for labour for the next year. The deal could involve a farm labourer and a “bondager” who worked with him, and in return accommodation and a “boll of wheat or potatoes” were part of the deal. The farmers struck the meanest bargain they thought would be effective and every cart in the countryside was needed at the next quarter day to move entire families and all their worldly goods from one inadequate farm cottage to another.


Only those,  who stood above these grim economic facts of life, could concentrate on the other features of the fair – the shows, the minstrels, the cheapjacks, the fortune tellers and the taverns and beer tents. At the fair of 1823, Rob Scott was only there for the beer – his job was secure, and he could afford to devote the day to serious drinking.

THE CRIME
The Scotsman of the following Saturday (July 5th 1823) told the sad tale of how the day resulted.

“HORRID MURDER  On Monday last, at Earlston Fair, there was a quarrel between Robert Scott, the Earlston carrier, and two other men belonging to that place, and Scott having been worsted, said he would be revenged ere long. He proceeded to follow the unfortunate men on their road home and having got a piece of an old pailing, he struck one of them dead on the spot, and dreadfully mangled the other who is since dead.

Scott then went to a public house and got a dram and told them that he had done for one and thumped the other well, and directed them where to find them. They instantly proceeded to the spot and found the unfortunate men weltering in their blood. Scott was instantly apprehended, and lodged in Greenlaw jail by the Sheriff, and he has since confessed the deed.”

Other accounts differ in details – Scott is elsewhere described as a gamekeeper, and his victims (James Aitcheson, a cooper, and Robert Sim, a horse dealer) came from Greenlaw, but there is no doubt that Scott quarrelled with the other two and followed them on their road home. There is no doubt about the severity of the injuries either. Aitcheson, who died immediately, had a fractured skull and his nose was slit, and Sim had a fractured leg as well as head injuries and facial  lacerations.

“That he should be, on Wednesday the 29th day of October next, delivered over by the Sheriffs of Roxburghshire to the Sheriffs of Berwickshire to be by them taken to the most convenient place for execution, near to the spot where the murders were committed, and there be hanged by the neck till he be dead, and afterwards the body be given to Dr Monro (the Edinburgh Professor of Anatomy) for dissection."

The case received wide coverage in the press across Britain as far afield as Cornwall and Inverness -  as evidenced by the number of entries listed in the British Newspapers Online.


THE EXECUTION
A "Scotsman" article of 1st November 1823 gave a detailed account of the execution, describing Robert Scott as "a powerful and muscular man".  On the day of execution, he was taken  from Jedburgh Jail to Earlston with an impressive escort. 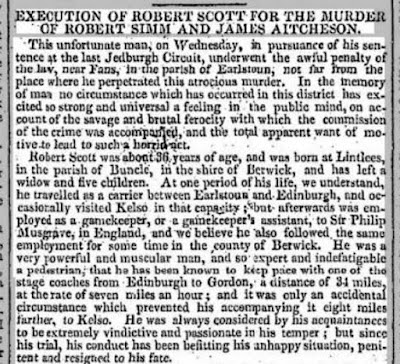 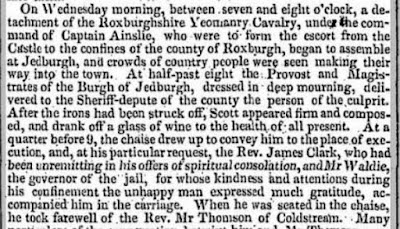 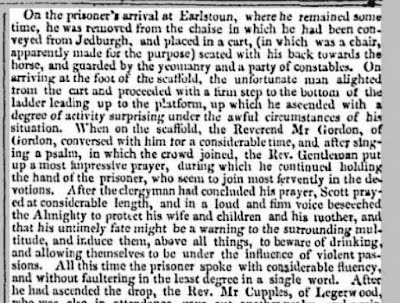 The newspaper concluded "The crowd of spectators , which amounted to many thousands from all parts of the country,  behaved with the utmost propriety, and many of them seemed deeply affected by the awful spectacle".

One such spectator was twelve year old Robert Carter, who later emigrated to New York and became a prominent publisher there.  His daughter in writing his biography included her father's memory of the execution:


"Thousands came to witness the execution. I was in that crowd. At a turn of the road I was within a few feet of him, and such a haggard face I never saw. It haunted me for many a year. When on the scaffold, he , in a loud voice that was heard by thousands,  prayed for mercy - that he might be delivered from blood guilti-ness, — prayed for the widows whom he had made widows, and for the children whom he had made fatherless. I never heard such earnest pleading, and I never forgot it."

The account book of the Sheriff Officer has survived and records bills for the tolls paid in conveying the body to Edinburgh and breakfasts (and large quantities of whisky) for the eleven men who watched the scaffold. Legend records that the eleven men spent the night in playing cards on the coffin of the condemned man.  (This will feature as a forthcoming blog article)

THE AFTERMATH
It was not quite the last hanging in Berwickshire. After the lapse of the  custom of public execution on the scene of the murder, there was a “private” hanging in Lauder Jail fifty years later.

Robert Scott’s family emigrated to Canada and did well there. But if you want to visit the scene of the last public hanging in the county, there is a wood called “Scott’s Plantation” at the turn of the road about a mile east of Fans farm.

The Auld Earlston Group  thanks  Dr.John Burns
for contributing this article.

An Earlston Legacy from a Czech Army Officer in 1944.

In 1944, Czech Army Officer, Milos Novak, was billeted with a family in Earlston.  He was a talented artist and he gifted to  the family this charming pen and ink drawing of the Charles Bridge in Prague, and a oil-painting of the view from his wartime Earlston home, looking onto the Black Hill. 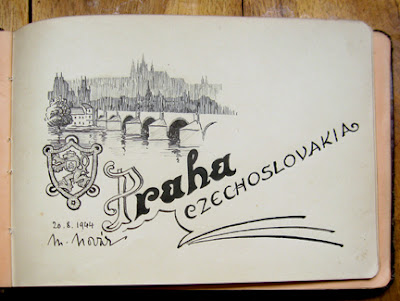 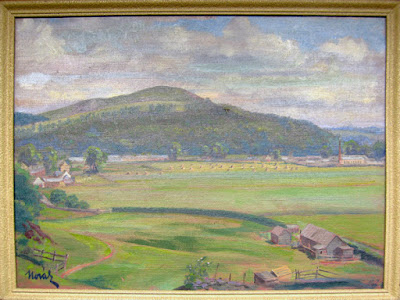 The two families remained in touch  after the war and  it was known that Milos had emigrated with his own family to Montreal in Canada around 1948, but contact was lost  in 1965.

Efforts are now being made to trace any of Milos’ descendants in Canada to make them aware of his art work and the fact that he is still remembered in Earlston.

This lovely wartime story emerged as part of Auld Earlston’s activities in gathering memories from local residents, in preparation for its exhibition on the theme “Earlston at War and Peace:  1914-1949”, to be held in the Church Hall on October 20th and 21st. The accompanying slide show, which is always a popular draw, will include the showing of a short  film on Earlston in the 1930’s.