How Earlston got its Name

"Earlston appears to have been a place of considerable importance during the early years of Scottish History. It was frequently, indeed, a royal residence.

During a visit in June 1136, David I subscribed there the foundation charter of Melrose Abbey, and in 1143 his son, Prince Henry, subscribed, also “at Ercheldu” the confirmatory charter of the same abbey. Among local barons the family of Lindsay held at first the chief position. Then the Earls of March and Dunbar come upon the scene, and remain for some time the real owners and lords of Ercildoune.

But they in turn pass away, and so now, of the very extensive territory in Lauderdale and the Merse formerly belonging to this old Border house, not a single acre is held by  an immediate representative of the family.

In the village of Ercildoune, at the east end, they had a stronghold for long known as the Earl’s Tower, but now demolished, and a group of buildings close at hand, probably remnants of feudal residences, was called Earl's Toun.

From this circumstance the original name of Ercildoune or Ercheldun (look-out or prospect hill) gradually blended into the growing Earl’s Toun, which modern usage has transformed into one word - Earlston. "

One of the oldest images of Earlston in a sketch of the High Street
with the distinctive building of the old Courtroom.


With thanks to Jeff Price of the Auld Earlston Group for spotting this article.

Isaac Wallace - from Earlston to Australia.

Scottish history is full of men and women who  stepped into the unknown by leaving their homeland behind and emigrating to far flung places.  Many of them might not be familiar names, yet they made their mark abroad, but never forgot where they had come from. They also demonstrated a sense of entrepreneurship, community involvement,  and a strong belief in their Presbyterian faith.

One such man was Isaac Wallace of Earlston (1841-1921),   who emigrated to Victoria, Australia,   where  he named his new home "Earlston", set up a butter factory, and involved himself in community affairs, both in Australia, but also on a return visit to Earlston towards the end of his life.

His Early Life
Isaac was the eldest of eight children,  born to master joiner, John Wallace and Martha, nee Brown.  His sister was Isabella Wallace. who later became known as "Earlston's friend and benefactor", with two memorial plaques around the village.

In the 1851 census, ten year old Isaac was the eldest child, with siblings John,  Mary, Robert and Hannah.  Ten years on  saw the family at No. 7 New Street (Thorn Street);  John was by this time a master joiner employing three apprentices and with four more children listed on the census entry -  Janet,  Isabella, George and Francis - but no Isaac.

An Australian Journey
For Isaac, a 19 year old, farm  servant who could read and write, had set sail in 1859  for Launceston,  Tasmania,  aboard the ship "The  Broomielaw".

From Tasmania, Isaac moved to the Victorian goldfields, where in 1862 he married Mary Hogarth who had emigrated with her parents from Lauder - a further  link with the Borders.

Isaac and Mary moved to Glenlyon, near Daylesford, Isaac was a good horseman and with a number of wagons, each carrying about a ton, he carted supplies to the store keepers on the gold fields. In the next thirteen years seven children were born -  John 1862, Agnes 1864, Martha 1866, Robert 1868, Mary 1870, Frank 1872 and young Isaac 1875 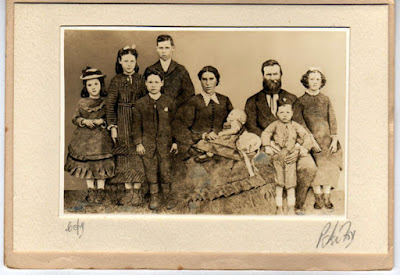 Isaac's wife Mary died in 1876 at the young age of 36, having borne seven children in thirteen years.

A  year later Isaac married again - his wife, Nicholes Brown nee Rogerson, a widow with four sons. A daughter Elizabeth was born to the marriage.   Together with the twelve children, they moved to  Isaac's land allocation of 320 acres, naming it Earlston.  It was situated in  Violet Town, in the shire of Strathbogie, 108 miles north of Melbourne. Maintaining the floral theme, Violet Town's  streets were named Cowslip,Tulip, Orchard, Rose, Lily and Hyacinth.

It was the discovery of gold in the north east of Victoria which led to large numbers of itinerant  prospectors passing through the area  and the village grew. Violet Town grew with the  railway arriving in 1873.  and had three hotels, a Wesleyan school. a bakery,  tradesmen and land developers.

Isaac's New Business Venture
Isaac,  noticing the swing to dairy-farming,  purchased Brown's unused flour mill and dwelling in Tulip Street in February 1891, and converted the building  into a butter factory  -  the first such creamery  in the area. His son Robert, Uncle Jim, and Harry Grogan built three houses for his workmen, whilst eldest  son, John managed Isaac's other properties at Earlston.


Isaac's venture flourished at first and he was greeted as a benefactor of both the town and countryside; He was inundated by demands for Violet Butter, of which he initially produced a ton a week at top prices, and expanded the machinery to meet the demand.


But success was short lived.  The railway vans carrying butter to market needed ice for the journey, so the citizens of nearby Euroa built a butter factory and ice works.  Euroa became the dominant factory in the area and it became harder for Isaac to maintain milk supply.  Circumstances were against him  with a number of wet years, followed by severe drought (1896-1903), and an  outbreak of diphtheria halting milk supplies.  Times were hard for the farmers, with many selling their dairy herds and moving to sheep farming and wool production, with  its lower labour costs.

Isaac's creamery amalgamated with  the Australian Producers and Traders Company, but was wound up in 1906. 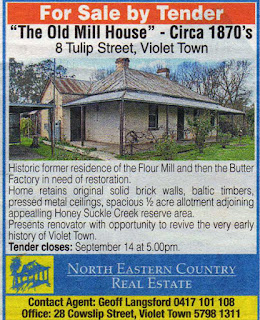 A Community-Minded Man
Isaac involved himself  in his  community , becoming a Justice of the Peace and  was appointed a Magistrate in 1886, sitting on the bench at Violet Town.

Isaac was president of the Mechanics Institute in the 1890’s and a member of the Progress Association when the Shire of Violet Town was formed in 1895 – he stood for council but wasn’t elected - his known independence of mind may have cost him  a seat. He was also a patron and a vice-president of the new football club in 1896.

Family Life
Isaac's second wife, Nicholes died on the 19th January 1907, aged 73 years, and was buried in the Violet Town cemetery. She had made each of her daughters-in-law a quilt.  One such quilt was passed down the family  and donated to the National Pioneer Women’s Hall of Fame in Alice Springs.


A Return to his  Homeland
Shortly after the death of his second wife, Isaac left  Melbourne aboard "The Runlic" in late March 1907 on a trip to the old country.

A  news snippet was traced in "The Southern Reporter" of 20th August 1908 which reported under the Earlston District News:


"Golf:   The final tie for the Silver Challenge Cup, presented by Mr Isaac Wallace, Australia, an old Earlstonian,  was p/ayed on Wednesday afternoon."

"The Berwickshire News" of 4th May 1909 reported on a Parish Council meeting at which the provision of seats in the village was discussed.

"It was agreed that nine of these seats should be provided at a cost of 9 shillings and 3 pence each.  The Rev. W. S. Crockett, Minister of Tweedsmuir [also an Earlstonian], and Mr Isaac Wallace, Australia  agreed to defray the expenses of one each and these to be placed in the West Green." 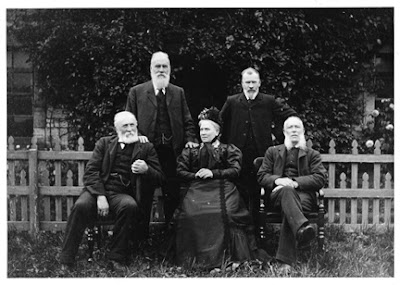 A group photograph taken on Isaac's return to Earlston
He is thought to be the tall figure on the left of the back row,
with his brothers, John,  Robert & George and sister Isabella.

Isaac's Continued Interest in Politics
Australia did  not  use conscription during the First World War, but with the large number of casualties and difficulties getting volunteers to enlist, a plebiscite was called to gauge the public’s thoughts on compulsory overseas military service. A furious debate ensued during 1916 and the plebiscite was narrowly defeated in October.

A report of a meeting at Violet Town appeared in the Euroa Advertiser on Friday the 30th March 1917, when Mr. W. Lane, J.P, in an appropriate speech, moved the following resolution:


“That this meeting of the residents of Violet Town and district, realising the present situation of the war as being serious, and that the number of recruits is far below what is required urges that every eligible man should volunteer, and thus prove to the brave lads who are now risking their lives for the welfare of the Empire that we will do our utmost to supply the necessary reinforcements until peace is proclaimed.

The motion was seconded by Mr. Isaac Wallace, J.P., who was accorded hearty rounds of applause when he vigorously declared:That although he was now an old man, if they would take him he was prepared to go. As it was, he was well represented at the war, having five grandsons and six nephews in the ranks, three of whom had paid the price.

The motion was carried enthusiastically, complimentary votes to speakers, singers, and chairman bringing a highly successful meeting to a close”. 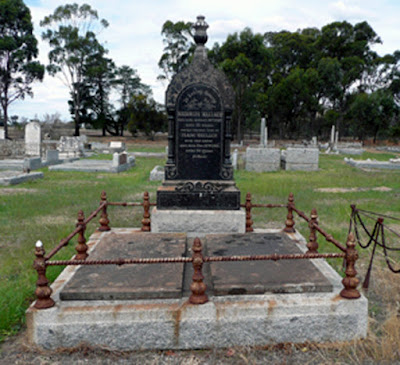 
With grateful thanks to Garth Grogan, descendant of Isaac Wallace, through his daughter Mary, for this detailed account of Isaac's life.

Other Earlston emigrants,  who made their mark in their new ,  feature on the Auld Earlston blog: