Christopher Sanderson of Earlston was, in the 1860's,  a successful master grocer and corn dealer,  in a position to buy a plot of land at West Green, demolish the cottages there and build a substantial corner block of townhouse properties.

Yet he left all this behind in a series of moves and made several court appearances, charged with arson and fraud.  What was the background to these changes in his life?

Local hairdresser Morag Sterrick was prompted to research the history of her West Green shop premises that she has occupied since 1995  and her findings into Christopher Sanderson's life form the basis of this blog post.  Her starting point was  her title deeds which showed that the land had been occupied as far back as 1662.

In  1851 Mr. Sanderson was an apprentice spinner, aged 21,  living with his parents James Sanderson and Agnes Lang.   By 1861 he was a master grocer, living with his wife, daughter and a servant at 9 Main Street in a house  with 7 rooms.  He bought the plot at West Green, occupied then by two dilapidated thatched cottages.

Eventually gaining permission from the Parish Council, he demolished the  cottages and built a handsome extended corner property, which by 1866 was fully occupied.  It included a double fronted shop with house above, rented by David Lochhead (Tom Davidson's today);  a significant town house with servant quarters which  became the Sanderson residence for Christopher, his wife Elizabeth and small daughter Margaret;   on the corner was his large  grocer's shop with windows on the High Street and the Green, whilst above was the Templar Hall, accessed by an internal stair.

It is worth noting that the village of Earlston was prosperous at this point in history, the 1860's, when the decade saw the coming of the railway, the opening of the Commercial Bank and the opening of the Corn Exchange in which Christopher Sanderson had shares.   Many of the properties we are familiar with today that form the Square and both sides of the High Street were built during this period.  Most of these houses included a shop, and some had stables, a small yard and an outhouse.

There were already nine grocer's shops in Earlston in 1861.   Was there possibly antagonism to Christopher Sanderson setting up a rival business? 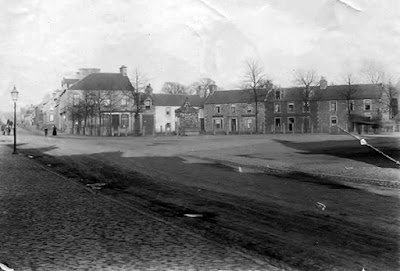 Looking across to the corner property built by Christopher Sanderson.
The young trees  in this photograph were planted around
The Green to mark the Diamond Jubilee of Queen Victoria in 1897.

It seemed all was going well for Christopher Sanderson.....but not for long

In 1866 the Sanderson’s five year old  daughter, Margaret, died. Christopher and Elizabeth moved to Gordon where their son James was born in 1868.  Back in Earlston, their grocer shop was staffed and business continued.

But soon another move was made, as the 1871 census saw the family at Loughhead  Farm Berwick-upon-Tweed.

Three years later, "The Newcastle Courant" of 16th October 1874,  along with Border press,  reported  on a fire at the farm - cause unknown, with stacks of wheat, barley and oats destroyed.   But as the paper put it "It was rather curious" that the grain had been sold the day before, and that a similar stackyard fire had taken place there in the previous January.   The loss  however was covered by the insurer. 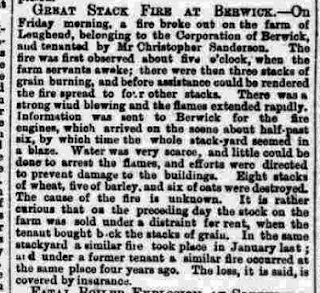 But similar incidents were to occur at Loughhead Farm,  as widely reported In March 1875 in Border newspapers, and the press in Edinburgh, Yorkshire, Derby, Leamington Spa and Brechin, Angus, with a typical headline "Farmer Charged with Setting Fire to his Stack Yard".

"The Berwickshire News" described how Thomas Rutherford, farm servant, saw a man go from the farmhouse in the direction of a  stack of barley,  and immediately the stack went on fire.  The man turned round and went back to the farmhouse and Rutherford saw that the man was Sanderson, the prisoner.  He had on a pair old  trousers, a Guernsey shirt and his braces were hanging by his side.  Rutherford went to the farmhouse to raise the alarm,  and was told to go into Berwick for the fire engine, but the prisoner did nothing to stay the fire. The whole of the stacks were consumed.  The insurance had been paid to the prisoner.  The Berwick Freemen, the Corporation of Berwick who were proprietors of the farm offered £50 for further information, but none was forthcoming. The case collapsed and Sanderson was discharged, as the "evidence against him was uncorroborated in in some essential particulars". 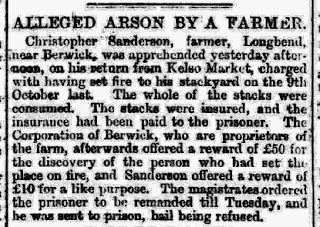 By the time of the 1881 census, the family was still at Loughend Farm, Berwick with Christopher described as a farmer of 99 acres, employing 2 labourers and one girl.

But his involvement in matters of the law continued.  According to an item in "The Southern Reporter" of 19th February 1887,  Christopher Sanderson appeared at Berwick County Court, sued by farmer James Cousens, Chirnside for £5 5s for seed wheat.  Sanderson alleged that the seed  was not of the specified weight and was of inferior quality.  However he had not examined the seed on delivery, nor sent it back, and the Judge ordered him to pay.

The 1891 census saw the family return to the Borders to  Crunklaw Farm, Edrom, near Duns, with Christopher aged 62,  Elizabeth 55 and James 22.  The  farm had its own corn mill. To raise the deposit on the lease, Christopher now took out a bond (his second), on the shop and house back in Earlston.

Life at Crunklaw was hard, with corn prices falling.   Elizabeth died in 1895,  followed by  Christopher on 29th April 1896 at Edrom.

Both the bonds on his two farms were unpaid and the landlords sued Christopher Sanderson’s estate. The bondsman sold the properties. The tenant in the house and shop in Earlston bought the freehold, and the Templers bought the grocers and hall above.

With Christopher Sanderson's original Earlston property now with new owners, the future was more secure. The Templars decided to split the grocers shop into two which made it easier to rent out.   The Earlston Valuation Roll for 1950-1951 showed John Rutherford, hairdresser at what is now the sweet shop, with Lizzie Burrell, confectioner in the smaller unit (now the hairdresser's).  After Lizzie's  death, nephew Stan Mason and his wife Helen continued the sweet shop.  Helen sold  to Houston the Bakers. The shop was a busy bakers shop for many years including my schooldays at Earlston High. The school pupils were in daily buying lunch, myself included. 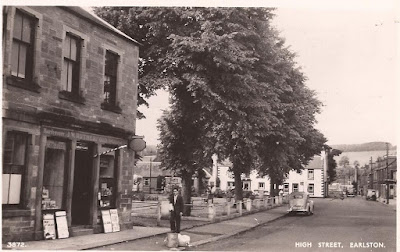 I bought the shop in September 1995 from Edward Bellerby.   I opened on 1st November 1995 and have been successful from day one.  I have been delighted to research the history of the building  and I get so interested when people come in with memories, photographs, and old documents.

I would like to tell this story to Christopher Sanderson’s descendants.  The family headstone is in Edrom churchyard.   Son James could not afford to keep on the farm there by himself and after falling behind on the rent, he moved away.    I know that James married and lived at Foulden.

But the mystery remains - why did Christopher Sanderson leave Earlston?  Why did he not return when  times were so hard? 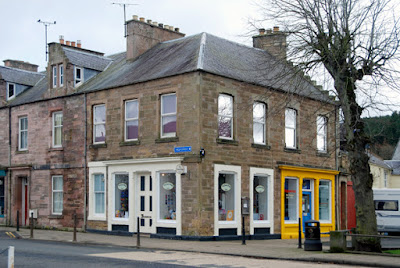 Do you have a story to tell about Earlston.s past that we could feature here?
We would love to hear from you.
E-mail:  auldearlston.aol.com

Among the items donated to the Auld Earlston Group is a photocopy of the first edition of "The Earlston Comet", published Saturday October 10th, 1891 at a price of one shilling. 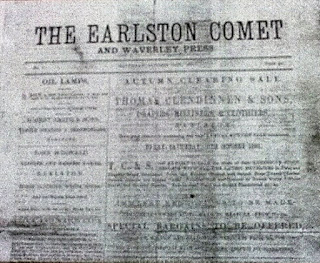 Old  newspapers are invaluable in giving us a picture of the times.  So what was occupying the mind of this new village journal?

The editorial promised to "advocate measures that are for the moral, social and industrial benefits of the community" .

Is public spirit in Earlston declining?

This was the controversial question posed in a letter from  "Alick" who  deplored  the demise or non activity of several societies, including the Literary Society, with its programme of interesting lectures,  the Choral  Union "that did something creditable in the musical way" and the "well managed Ornithological Society of considerable pretensions with an annual exhibition,  and a competition which drew a large number of exhibitors and visitors".   He also asked that someone who was at the Public Picnic and was  "gifted with a graphic pen forward a description of  the  grand proceedings of that occasion for publication in the next edition of the "Comet".

"What  is to become of Earlston if something is not done to arrest  the galloping decline of  public spirit which seems to have set in with such virulence."

Unfortunately we do not have later  editions of the newspaper to find what reaction twas provoked by this viewpoint on the state of the village.

Among other  reports were:

Background Information
Finding  more information on "The Earlston Comet" proved a challenge, with the National Library of Scotland providing some answers, although it did not hold any copies of the title itself .  There  was mention of it  in "The Waterloo Directory of Scottish Newspapers and Periodicals, 1800-1900", and in  "Mitchell's Annual Newspaper Press  Directory".

The Earlston Comet" was published by William Norrie, with "frequency irregular" between 1891 and 1894 and was then  the only newspaper printed and published in Berwickshire" .

William Norrie adopted the name of "Waverley Press" for his  business, and wrote and published in 1891 a book "Edinburgh Newspapers, Past and Present".  Apart from those points,  William Norrie has proved very elusive with no information traced on him either in Edinburgh, Midlothian or the Border counties - surprising given that the 1891 census had taken place a few months before "The Earlston Comet" first appeared on the scene.

It seems, however, that the title proved short lived. Perhaps  a contributor factor was the cost of one shilling (12 pennies)  which would be beyond many residents, given a loaf of bread cost around one  penny.