B.'s account of her Life as an Earlston Land Girl at Georgefield Farm, 1944-45 evoked a lot of interest when it was published recently on the Auld Earlston blog.

Since then two related photographs have come to light: 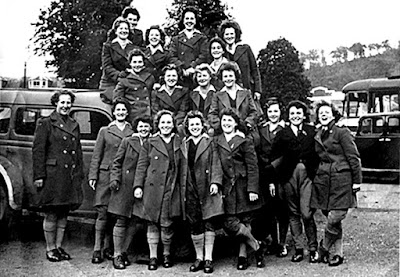 Land Girls gathering in Earlston for work on local farms
during the Second World War. 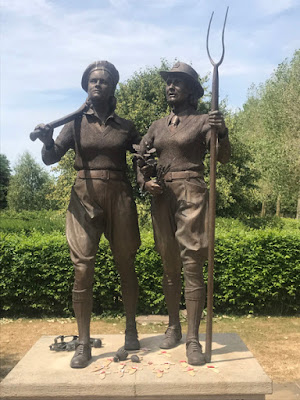 The monument to the Land Army and the Timber Corps
at the National Memorial Arboretum, near Lichfield, Staffordshire.

The Arboretum is a 150 acre woodland site that stands as a scenic commemoration to British servicemen and women with nearly 300 different memorials.

During the Second World War The Land Army and the Timber Corps directed women to fill the places in agriculture and forestry to replace the men called up into the armed forces.   At first volunteers were sought. but  then numbers  were increased by conscription.   By 1944 the Women's Land Army  had over 80,000 members across Britain.   It was officially disbanded in 1949.

**************
Do you have any wartime photographs or memories, or ones passed down to you from your parents or grandparents on life in the village during the war.

If so, do please get in touch, as we would like to hear from you. Items will be copied and returned to you, and may be featured in our forthcoming exhibition in October.

THANK YOU
Posted by ScotSue at 07:48 No comments:

Earlston Clown Band On Parade Across the Borders

Photographs of Earlston Clown Band have appeared before on the Auld Earlston blog, but what do we know about their founders,   their distinctive theme and costume,  and where they performed?

Local newspapers available now online (at www.findmypast.co.uk) give us some answers,  with  numerous reports from the early 20th century highlighting the popularity of the band across the Scottish Borders.

The earliest report found appeared in "The Berwickshire News" of 28th August 1906 and referred to a village picnic at Cowdenknowes House, near Earlston, where the band was the star performer in  the entertainment.


"The famous Clown Band was unanimously considered, nay acclaimed  as the most striking and most original performance of the day..........  The performer on the big drum would be marked for distinction,  for never before "throbbed the war drum" under such handling as it got from  the wielder of the drum sticks." 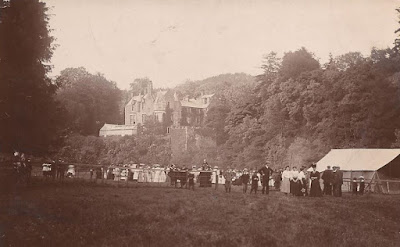 This photograph of Cowdenknowes House is not dated, but, judging by the costume, this could well by the picnic event in 1906. 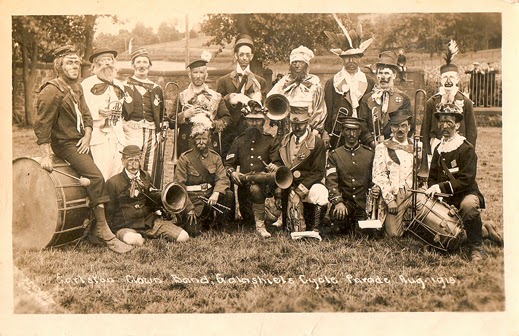 On 14th January 1919,  "The Berwickshire News"  reporter waxed eloquently in a colourful account of a school concert where:

The finale  was the performance of Earlston Junior Clown Band, trained by Miss Gil, one of the teachers, and her pupils did her infinite credit.  This  was thought to be the crowning performance of the evening and caused a great sensation.   Their grotesque garments and equally grotesque musical  performance  made the bandsmen the heroes of the hour, the observed of all observers, the cynosure of every eye.  Their contribution to the evening  was a veritable  triumph  and was rewarded with tremendous applause."

You do wonder what their "grotesque musical performance" sounded like! 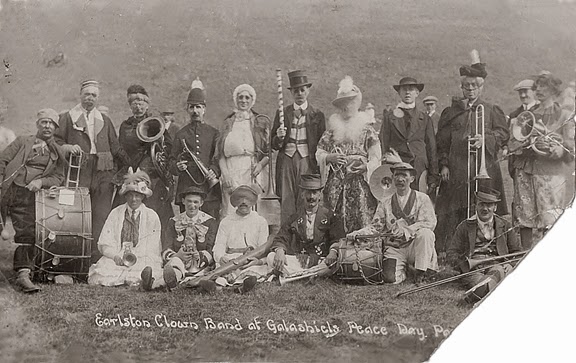 The Band at Galashiels Peace Parade, 1919

1923 was a busy summer for the Band, for they appeared  at many events across the Borders, including  a fancy dress parade to aid the funds of Earlston Bowling Club.


"The streets along which the procession passed were crowded  with spectators, with over 100 adults and juveniles taking part. The local Clown Band, attired in fantastic dresses,  brought up the rear. 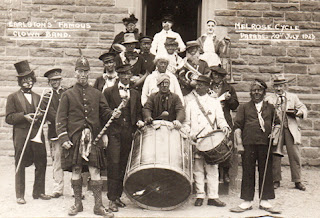 This was a major three-day event to raise funds for Melrose Football Club and included a bazaar, a concert, a cycle parade/fancy dress parade and a dance at which the Clown Band opened the evening with a Clown Waltz.

In October 1923 the band  opened the celebrations at Mellerstain House following the marriage of Lord and Lady Haddington and returned in 1934 to mark the birth of a daughter, where:

"With the  bonfire well alight, and the surroundings brightly illuminated, Earlston Clown Band entertained the workers and those who congregated around the blazing bonfire.   Liberal refreshments were served and the night was one of gaity." 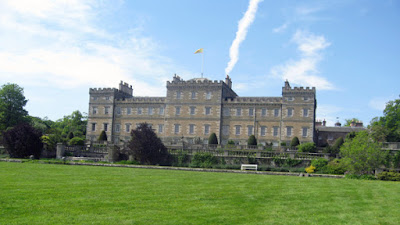 May 1937 saw the  Earlston celebrations to mark the coronation of George VI  in the village, with the  fancy dress pageant 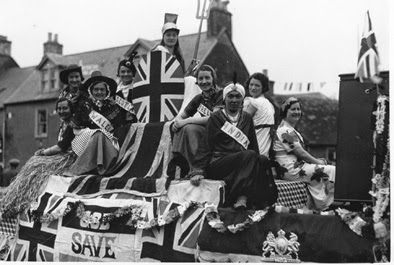 The last report found  was  in "The Berwickshire News" of 13th July 1937 when the band took part, with great acclaim.   in a fancy dress parade in Lauder.

"Much of the success of the parade was due to the efforts of the Earlston Clown Band,  which led the procession through the streets of the Burgh .  The antics of the band, who were all in character,  and its leader Mr. John Murdison roused peals of laughter from the many spectators who had gathered to watch the procession.

At the presentation of the prizes, an extra vote of thanks was given to Earlston Clown Band, who had kindly given their services free, and to Mr. J. Murdison and Ian Macdonald who were instrumental in bringing the band to Lauder."

No further press reports were traced after that date. Did the outbreak of war bring an end to the Clown Band activities,  which had delighted its followers down the decades?

We have very few clues on how the Clown Band came about.

A brief newspaper item in 1920 refers to a presentation given to founder member Mr L. G. Dempster who was emigrating to Canada, with thanks for the service he had rendered the band "which now occupies a conspicuous place amongst Earlston Institutions".

A  report  in "The Southern Reporter"  3rd July 1924 noted  the death of Sergeant George S. Dunn, formerly of the Black Watch.  Having left the army, he was for some time manager of the Red Lion in Earlston, but later moved to Galashiels to work in Netherdale Mill.  He was very active  in musical circles - conductor of the Ex-Service Men's Orchestra which gave concerts with the Male Voice Choir, and also  "One of the Originators of Earlston Clown Band". 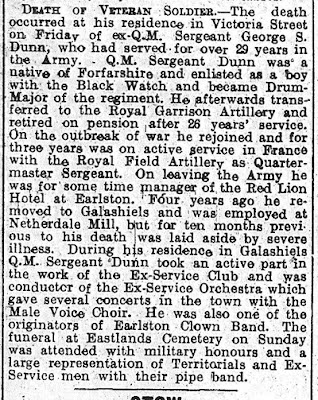 Does any reader have memories through their parents or grandparents of Earlston Clown Band? If so we would like to hear from you.
Contact:  auldearlston@aol.com