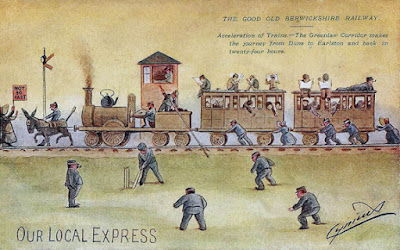 Our Local Express - The Good Old Berwickshire Railway
Acceleration of Trains - the Greenlaw  Corridor makes the journey
from Greenlaw to Earlston  and back in twenty four hours.
Postcard franked 1906. 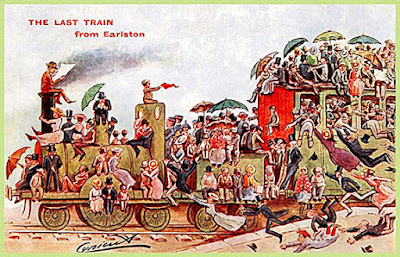 These are not, however original to Earlston,  but penned by  Fife born artist  Martin  Anderson - you will see his pseudonym signature of Cynicus  at the foot of each card. Many of his railway cartoons were overprinted with different captions and town names, as here.

Martin Anderson, (1854 –193)  studied  at Glasgow School of Art, set up the St. Mungo's Art Club and exhibited at the Royal Scottish Academy in Edinburgh.    In 1880 he joined  the publisher of  The Dundee Advertiser, The Evening Telegraph, People's Journal, and People's Friend - the first  such staff artist to be employed by any daily newspaper in Britain, for until then daily newspapers were not illustrated.

He turned increasingly to satirical and political cartoons and comic postcard illustrations setting up the "Cynicus Publishing Company".   After initial success, the company was forced to close.  Martin Anderson returned to Edinburgh in 1915, leasing a basement shop in York Place. Nine years later  his Edinburgh shop was destroyed by fire, everything inside it was lost, and he did not have the funds to repair and restock it.

A sad end for such a prolific artist who was a forerunner in  the  field of humourous postcards.  His work is still regularly available in auction houses and online.


If you have any postcards of Earlston, the Auld Earlston Group would love
to hear from you.


Your postcards can either be donated or loaned, scanned and returned to you.
Contact:   auldearlston@aol.com

Earlston Reading Room - Its Past and Its Future

Earlston's Reading Room occupies a prominent place in the Market Square, but sadly this once important building is now unoccupied, unused and presents a dilapidated air, with many of the artifacts of paintings and books still in place but fast deteriorating.
A public meeting, to be chaired by Council Convenor David Parker, is to be  held on Tuesday April 26th 2016  at 7pm in the Church Hall to discuss its future.  So it seemed an appropriate time to look back at its past. The Reading room on the left to next to the Corn Exchange with its belfry tower. The photograph predates 1921 when the pump tower on the right was demolished to make way for the war memorial.

In the 19th century Reading Rooms were a symbol of  Victorian self-help and the  desire for education.   They were warm, dry and largely free,  where you could read newspapers, and borrow books.

Auld Earlston holds  "Earlston's Reading Room and Library - Rules and Regulations", written in 1955 by Mr. R. Smith  at the request of the Reading Room Committee.  Importantly  it includes a brief history.


The document presents a fascinating read with details of the behaviour expected of users.  Newspapers of the day regularly reported on the Reading Room Committee Meetings and give us an insight into the discussions and  the choice of reading material purchased - with the emphasis on books of a "high moral tendency".

HISTORY
Major Baillie of Mellerstain was the instigator.   In 1852 a meeting was held in the village  to gauge support for a Reading Room  at which the Major offered an initial donation of fifty  books for the library.  His offer was unanimously accepted, a committee formed with Major Baillie as President  and a Librarian duly appointed as manager.

The Recreation Room, too, had its strict rules:

118 people have availed themselves of the privilege of membership   and that it was gratifying to note the success of this useful institution which affords so many advantages at a very moderate cost. Members have access to the Library of up to 700 volumes, and to the reading room which has a regular supply of daily and weekly newspapers and periodicals, all for the all but nominal charge of 7d per quarter."

In 1877 thanks were given to  "Mr Colesworth of Cowdenknowes for his handsome gift of the Encyclopaedia Britannica, and  transactions of the Geographical Society".

Funding
The Reading Room remained a private subscription library, not supported by  any charitable grants  The early subscription of 7d per quarter had risen by 1955  to 10 shillings per annum.


Old newspapers were sold each quarter  and events regularly took place for fund raising - these included whist drives, concerts,  and in 1924 "a theatrical and  vaudeville entertainment".  In the latter years, the Camera Club regularly held meetings there.

The Southern Reporter of 5th May 1898 reported on a major bazaar:

"To meet the expenses of considerable improvements to the building and to buy new books. To increase the house accommodation of the librarian and create a larger and better recreation room."

A Centenary Celebration was held in Red Lion Hotel on 17th June  1952 at  which the President the Earl of  Haddington presented a framed  copy of the *National Covenant with the signatures of the people of Earlston, who signed it  in 1638. at Greyfriars, Edinburgh.  It was also  noted that the Library had a number of valuable possessions including  a lock of Sir Walter Scott's hair and his autograph;  and that the Reading Room had risen from a humble two roomed, thatched building to the impressive building occupying a central position in Earlston Square. 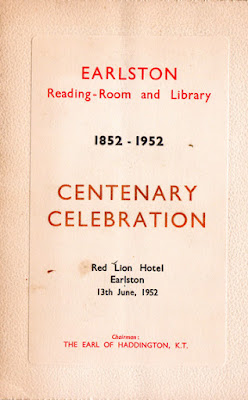 The Latter Years
The 1970's saw the opening of a Public Library in the school offering a new free facility to local readers. With the death of Reading Room secretary, John Weatherly, and all the Trustees, no-one was left to take on the management of the facility. Hence its sorry state today. 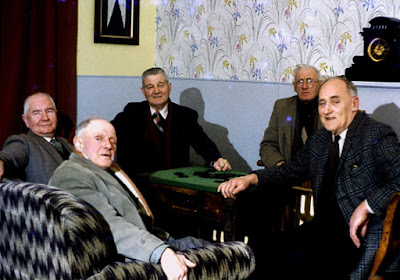 Enjoying a break in the  Reading Room c.late 1960s


UPDATE
A  packed public meeting on April 26th 2016  heard a presentation from Council Convenor David Parker on the current legal position regarding  the ownership of the Reading Room and  outlined options for the whole community to work together on a way forward. A steering committee is being set up to look at revitalising this once important symbol of Earlston's heritage. 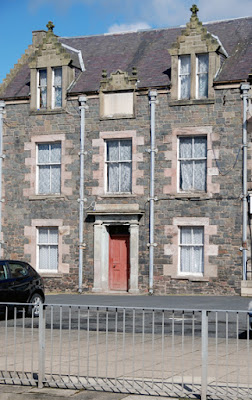 Earlston Reading Room - April 2016
*  The National Covenant
"The signing of the National Covenant has been called the biggest event in Scottish history. In essence it was a document, a contract with God, signed by the Nobles, Ministers and thousands of ordinary Scots, who pledged themselves to defend Scotland’s rights by stating what they would and wouldn't agree to in matters of Kirk and state.  The Covenant demanded a free Scottish Parliament and a General Assembly, free from the King’s interference, and specifically, it demanded the abolition of bishops." (Source BBC Scottish History)

The copy donated to the Reading Room by Lord Haddington in 1952 is now in the care of the Heritage Hub, Hawick.

Railway Photographs on Show around the Village

Take a look around Earlston and you will now see
old photographs of Earlston's Railway
displayed in 22 shops and venues in the village.

They are the result of Auld Earlston's  recent project "Remembering Earlston's Railway 1863-1965" . 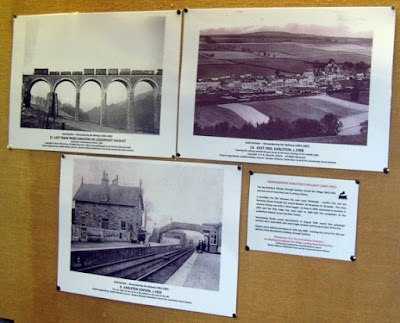 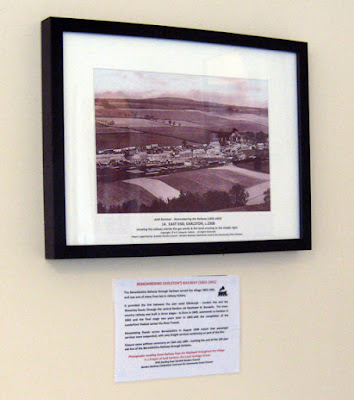 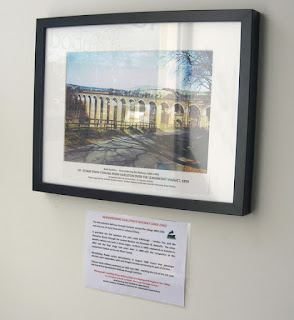 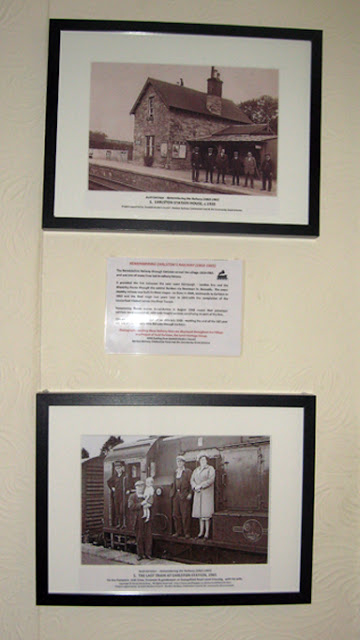 The Berwickshire Railway through Earlston served the village 1863-1965. and was one of many lines lost in railway history.

It provided the link between the east coast Edinburgh - London line and the Waverley Route through the central Borders via Newtown St. Boswells. The cross- country railway was built in three stages - to Duns in 1849, westwards to Earlston in 1863 and the final stage two years later in 1865 with the completion of the Leaderfoot Viaduct across the River Tweed.

Devastating floods across Berwickshire in August 1948 meant that passenger services were suspended, with only freight services continuing on part of the line.

Closure came without ceremony on 16th July 1965 - marking the end of the 102 year old line of the Berwickshire Railway through Earlston.