Auld Earlston On Show in October - A Date For Your Diary

Dates for Your Diary


Valuing the History of our Village for Future Generations 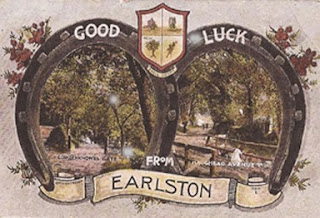 "HORSES TO HORSE-POWER"
An Exhibition on Travel around Earlston in Times Past
Saturday Oct.21st, 10am-3pm
Sunday Oct. 22nd, 12noon-4pm

"Horses to Horse-Power" - Travel in Times Past" is the theme of this year's exhibition,   with displays of vintage photographs on all forms of getting about the village - horses, bicycles, motor bikes, cars, vans, buses, trains, vehicles in industry and farming, roads, bridges and even planes, plus tales of journeys from days gone by. 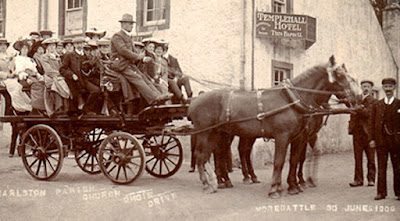 Earlston Parish Church Choir Outing to Morebattle in June 1906 -
A 20 mile hilly journey on a crowded wagonette,
with no protection against the elements!

Throughout the two days, an hour-long new slide show will be looking at  "Earlston from West to East" - Saturday at 11am and 2pm; Sunday at 1pm and 2.30pm 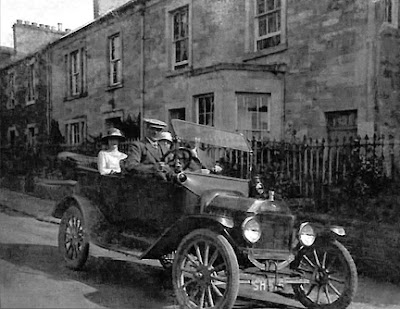 You also have the chance to share your own memories of village life and chat over tea/coffee with members of the Auld Earlston Group.

Do come along to our event and see what our group is doing
to keep Earlston's past alive for future generations.

Two unrelated posts  on  his Earlston  ancestors  recently caught the attention of blog reader David  Nisbet, who has been in touch regarding his Swantson family - David Swanston, post runner and William Swanston, the official photographer for the visit of Prime Minister Herbert Asquith in 1908. 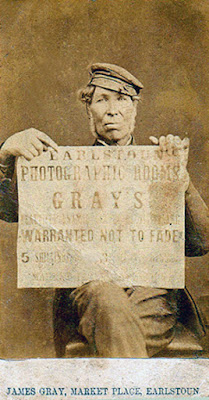 This photograph came into the Auld Earlston collection and was identified on the reverse as David Swanston, Post Runner, here adverting the business of James Gray, photographer in the Square.  It is one of the oldest photographs in the group's collection, as David died in 1874.


In Rutherford's "Directory of the Southern Counties", published in 1866, there is an entry for David Swanston, post runner.  Somehow that term conjures up a picture of a man running around the village with his post bag, delivering the mail.  But in fact David drove a horse and cart in the course of his work.

We get a colourful account of his days  in an item published in "The Berwickshire News & General Advertiser", 21st June 1902.   It looked back at "Melrose Postmen of Olden Days", reprinting an earlier article in  "The Kelso Chronicle".


"David Swanston was the runner for Earlston, driving  a pony (called Ben) and a cart.  David's turnout was a regular institution for foot passengers on the route, and on certain days they  were packed  in the vehicle like herring in a barrel.

On overtaking a passenger on the road, David would announce "If there's no' room the now, we will soon mak' room" and accordingly the passengers had to obey orders and creep closer together.   If on certain occasions, if he was a little jimp [?] for that time in the morning, he would  meet the scowl of the postmistress by saying that "Ben had a bad nail in his foot this mornin'".

If he should be late in Melrose  no wonder, when we recall he had to be in there in time to dispatch the letters from Earlston for the first train  in the morning.  This was a time when the railway was in a primitive state, the terminus of the North British being at Hawick.

David stabled at The Ship Inn [in Melrose] and some days would say to his colleagues, "If anyone asks for me, just say I maun board ship for a minute or two, for mercy it was cauld coming over this morning".  In the summer, the excuse for boarding the ship was   "the heat is fair meltin' the day" ."

Clearly David was a well known "character" locally. Census Returns showed him listed   as "post runner between Earlston and Melrose", living with his wife Charlotte Thorburn   and their six children.  He  was still working in 1871,  living at 30 Main Street, but died three years later aged 58 and was buried in Earlston Churchyard.  Charlotte, his wife  died in  1877.   A plaque in the church wall sadly records the young deaths of three of their children - Agnes aged 18 months in 1867, son James aged 28 in 1871, and youngest son William died in 1875 aged just  7 years old.

David's daughter Isabella was the second of the six children.  At the age of seventeen, on 8 January 1857, she had an illegitimate son,  William  who was to become the well-known  Edinburgh photographer.

Four years later Isabella married in Earlston the father of her child, stone mason, William Moffat.   They went on to have six more children - Charlotte, John, Thomas, Robert, Lizzie and Richard.   Isabella, by then a widow for 22 years, died in 1909, preceded by the death of two of her children, Thomas and Robert Alexander  - all buried in Earlston Churchyard.

In 1871,  thirteen year old  William was living with his grandparents post runner David and his wife Charlotte.  Ten years later in 1881  he was described as a lead pipe maker, living in Leith, married - his wife, Australian born  Helen Sutherland.  In 1891 he was in the same occupation, but at some point in the decade, he had  a major change of direction  to that of photographer. 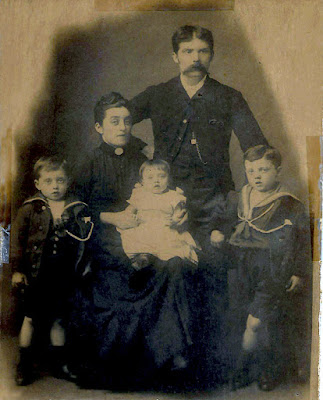 William's  photographic business at 302 Leith Walk, Edinburgh  seems to have prospered,   and his studio was listed in the Edinburgh & Leith trade directories,  from 1896 until 1930.  William died in 1921.

Below - one  of his photographs from the visit to Earlston of Prime Minister Asquith in 1908. 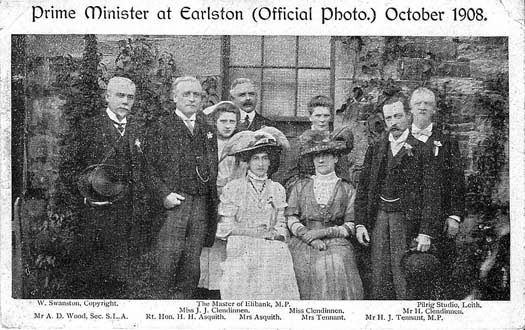 PostScript:  William's sons both followed him into the profession.   William Henderson Swanston was attached to the Australian forces at Gallipoli in the First World War, with many of his photographs now held in  the collection of the Australian Archives.

Mr Nisbet would be delighted to hear from anyone with Swanston and Moffat connections. Please contact in the first instance:  auldearlston@aol.com

Blog reader John Gordon has been in touch with information on his ancestral links with Earlston. These include:


The Whale and Clendinnen families,  Gingham Manufacturers
The Hunter family of blacksmiths
The Young  family of joiners


John's grandmother inspired him to find out more about his family history and provided him with much of the information, that included  family trees, notes and photographs.  These are especially valuable when documentary evidence is not readily available on ancestors  born before the first census returns in 1841.

In Earlston,  the Hunter family was traced back to James Hunter  - according to the family notes "He was the village blacksmith  - his forge stood near to where the railway station is now."


His son Andrew Hunter carried on the family business and married Isabella Bunzie (?).  They had four sons and one daughter.  Robert and James followed their father into the trade, but James died at the age of 19, kicked by a horse, according to the notes on the family tree.  Son Andrew became a joiner.

Youngest sonWilliam Hunter was baptised in Earlston Parish Church in 1792.  Like his brother Robert, he became a joiner but at one point worked as a grocer in Bristo Street, Edinburgh.  There are two notes on his tragic death at the young age of 25 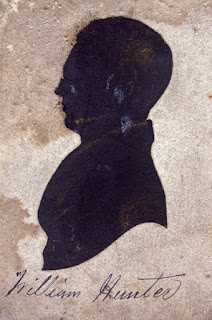 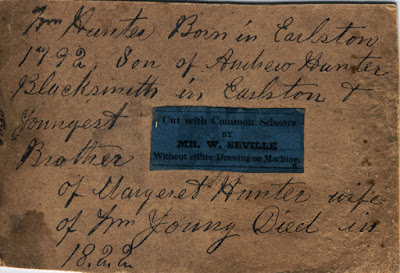 A silhouette of William and a note amongst the family papers. 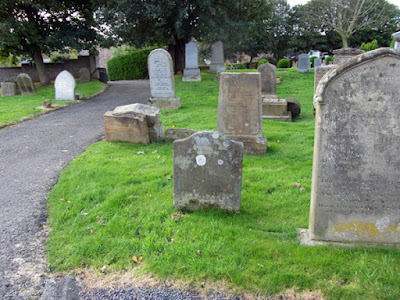 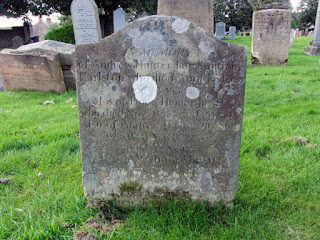 The family gravestone (above)  in Earlston Churchyard reads:

So Isabella experienced the loss at an early age of  three of her four sons.

Only daughter Margaret Hunter was born in 1786.   At 20 years old, on 10th February 1806, she married William Young, like his father, a joiner in Earlston, who later set up business in Edinburgh.

Margaret Hunter and William Young had seven daughters and two sons, including another William.  This William Young was in the army and in the 1851 census was a grocer in Canongate, Edinburgh.

A copy of his undated and unsigned will  began

"I William Young  Corporal in his Majesties 55th Regiment of foot, now or lately stationed at Chinsurah Bengal, East Indies, only son and heir apparent of William Young, wright in Edinburgh.........

He makes provision for  his mother Margaret Hunter Young with life rent of properties in both  Earlston and Edinburgh - thus indicating the family were of some standing.  The document is wordy and detailed as to the dimensions of the Earlston property.

The 1855 Earlston Valuation Records  for 1855  (available on line at  ScotlandsPeople  lists Margret Young of Edinburgh  as owning four properties in the village, with the tenants George Fairbairn, George Fisher, Henry Glendinning and Elizabeth Glendinning. 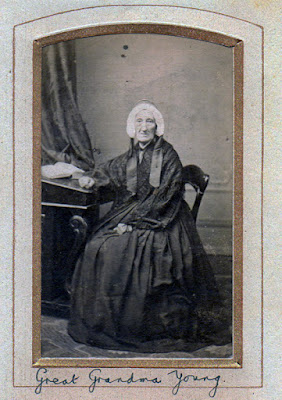 The Auld Earlston Blog  welcomes contributions from readers,
including memories of what life was like,  growing up in the village.