Researching Earlston's Friend and Benefactor,  Isabella Wallace  proved to be a Tale of One Name, Three People and Two Wills.

Two  plaques around the village acknowledge the generosity of Isabella Wallace. Hearsay also  spoke of the fact that Isabella Wallace had died in the 1920's, leaving money to be  used for  local projects.


This struck me as a straightforward  local history challenge, but it proved to be not quite as easy as I thought.

I began the search on the family history site ScotlandsPeople website and immediately hit a stumbling block   - there were three Isabella Wallaces in Earlston during the late 19th century.   But which one was the village's generous benefactor?  I set out to trace the family of each Isabella.

(1)  Isabella Wallace , born 20 Jan 1850 to Henry Wallace  (Master Shoemaker) and Elizabeth Swan.
In the 1851 census,  young Isabella was with her parents and brother David.  But ten years later  her father was a widower with three children at home - David, Robert and daughter Elizabeth.  Their mother had died in 1857, aged 32.  Isabella was with her widowed aunt Helen Mercer and her cousin William Mercer.  In the 1871 census,  Isabella,  described as "companion",  was still living with her aunt, and following her death, she became housekeeper to her cousin William. 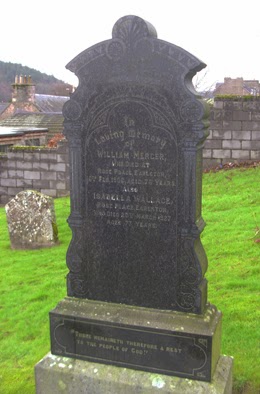 Isabella remained single all her life and died 20th March 1927.  It is important to note that, unlike their English equivalent,  Scottish death certificates give the name of the parents, so I knew here that I had traced the death certificate of  the Isabella who was daughter of Henry and Elizabeth - and not the other Isabella Wallace's in Earlston at this time. She was buried in Earlston Churchyard (right).

To my delight I discovered  she had left a will - surely an indication of money to leave to relatives and charitable causes!

The will also confirmed that "the late William Mercer, draper, Earlston, bequeathed  all his estate heritable and moveable to me".  So here was confirmation of  the source of Isabella's  wealth.


Of course primarily I was looking for an indication of money left to the parish. But the only reference was to some shares in Earlston Corn Exchange Company, with the income to be used   in "keeping the burial ground and tombstone in Earlston Churchyard in order".  It seemed that, despite my initial high hopes. this Isabella may not be the benefactor I was looking for.

(2) Isabella Wallace, born 18th November 1850, to George Wallace (Innkeeper at the Commercial Inn)  and Agnes Hudson.
In the 1851 census,  the young Isabella was with her parents, older brother William and one servant. By 1861 the family had grown further with siblings, Helen, Agnes, John and George, to be later joined by Elizabeth and Janet - a family of eight in seventeen years. All the family were still at home in 1871.
Isabella could not be traced in the 1881 census and could well have married by this time - or died. but I was unable to trace  any entries in the Scottish records.  So I discounted this Isabella in my search for Earlston's benefactor.

(3) Isabella Wallace, born c.1854, to John Wallace (master joiner) and Martha Stewart Brown.
I was unable to trace a birth or baptism record for Isabella - this was surprising, as although compulsory registration in Scotland was not introduced until  1855 (1837 in England & Wales), the practice was becoming more and more prevalent in the lead up to that date.
In 1861, Isabella,  aged  7, was with her parents and siblings in Market Square, Earlston - John 18, Robert 14, Hannah 12, Janet 10, George 5 and Francis 1, plus Mary Brown (mother in law).   Her father John was described as  a master joiner employing 3 apprentices.
Twenty years on In the 1881 census, Isabella  was housekeeper to her brother George, also a joiner and his nephew James.  The 1891, 1901 and 1911 census returns showed her continuing in this role, latterly in a house which had eight rooms with windows - surely indicating status and money.

Isabella died 2nd June 1920, with the informant her niece Agnes  and her parents confirmed as John and Martha.  Again to my delight I traced a will on ScotlandsPeople.

The residue of Isabella's estate, she bequeathed to the Royal Infirmary of Edinburgh.

But notably -   the sum of £3250 was left to Earlston Parish Council  "For the purpose of improving the amenities of the Town of Earlston including footpaths, paving,  and lighting, and similar objects".

I had identified the correct Isabella!

A visit to the Heritage Hub at Hawick was called for,  where I consulted the unique material not easily available elsewhere.:

In  the years I looked at, the records confirmed that the Isabella Wallace Fund was used for the provision of  lighting, the upgrading of the Square, with  railings around the War Memorial,  the removal of an air raid shelter, and a gateway  and railings at the riverside park at Mill Meadow.


The pump and horse well on the right were demolished in 1920 to make way for the erection of the War Memorial. 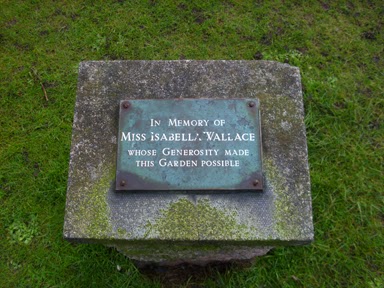 A  poignant story is linked to Isabella's decision to grant this money to her home village. Local anecdotes recall  that her father's home and business in the Market Square was devastated by a fire. Local people rallied  round with great generosity to help the family - something that Isabella never forgot.

Isabella Wallace  repaid   this through her will.  to become "Earlston's Friend and Benefactor"


With thanks to the Auld Earlston Group and its associated website Lost Earlston
for the old photographs of the village.
Posted by ScotSue at 02:17 4 comments:

Farming in Earlston in Days Gone By

As we come close to marking harvest time, we here take a look at farming in Earlston  in days gone by,  with photographs from the Auld Earlston collection.

The Statistical Account of Scotland for 1791 in the chapter on Earlston gives us an early description of farming around the village.


"The farmers rear a considerable number of black cattle...which they fatten on turnips.  The most common crops in this parish are  oats, barley and peas.  There is also some wheat.  The oats that grow on the grounds at Fans are much esteemed. There is now a greet quantity of clover and of  rye grass sown."

The account also noted that two fairs were held in Earlston  - on the 28th June  for sheep, black cattle and horses, reckoned to be "the second best fair in the south of Scotland".  The other fair was held on the third  Thursday of October.


*The Scottish National  Dictionary defines a "hind" in  Southern Scotland and Northumberland as  "a married skilled farm worker who occupies a cottage on the farm and is granted certain perquisites in addition to wages.

Hiring Fairs were also social occasions with a rare opportunity for friends and family to meet and enjoy side shows and stalls - as can be seen in the two photographs featured. .

Hiring Fairs lost their importance in the First World War and had largely died out by the late 1930's. 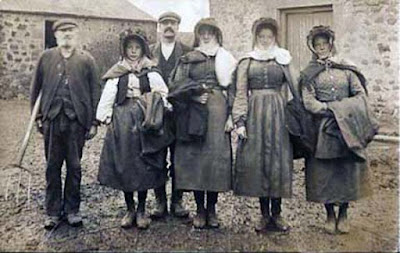 Bondagers were female farm workers in south east Scotland and Northumberland.   As part of their husband's contract (or bond) with the farmer, he would undertake to  provide another worker (usually his wife) to help as and when  required. The women  wore a distinctive dress with bonnet, described as the "last remaining peasant costume" in Britain.

"Horses are absolutely necessary in this part of the country, for it is by them the farmers labour their farms and drive their corn to market.  They never work with oxen now as they did formerly." - a quote from the 1791 Statistical Account. 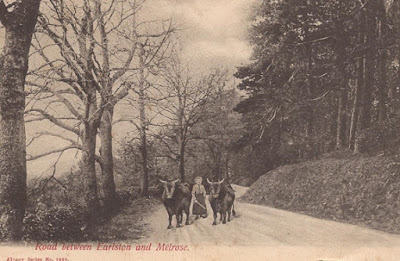 Oxen feature in this old photograph which is described as on the  "Road between Earlston and Melrose".

Anyone tracing their family history may well have  a "carter or carrier " in their ancestry - an essential occupation in transporting farmers' goods around. 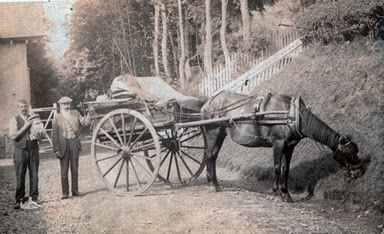 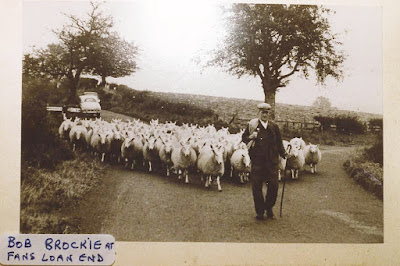 Thank you to everyone who has  donated or loaned old photographs for scanning.

Auld Earlston welcomes all contributions on the village's past  - contact us on  auldearlston@aol.com or via the comments box below.