The Costs of Robert Scott's Execution in 1823.

The previous post on the Auld Earlston blog told the tale of Robert Scott, who, on the night after the Earlston Fair, murdered two men on the road near Fans, and was duly tried and executed on the spot where he committed the crime. 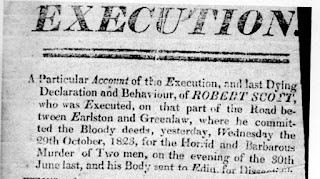 Section of the handbill giving the news of Robert Scott's execution. **

The account book of the Sheriff Officer has survived and  gives us details of  the costs of  the execution and the transporting of the body to Edinburgh for medical dissection.  The report, transcribed below, makes fascinating reading - not least for the amount spent on refreshments and liquor!

In connection with Scott’s confinement in Greenlaw Jail:

The accounts after Scott was handed over to the Sheriff of Berwickshire are rendered to the Right Honourable Barons of Exchequer by Andrew Easton, Sheriff Officer, Berwickshire. Among the items are the following:
(It is said that the watchers amused themselves playing cards using the waiting coffin as a table.)

The total account rendered by the Procurator Fiscal on 15th December 1823 to the Exchequer for the Execution of Robert Scott £243.2s.7d.

The Gallows was probably included in the above total. It cost £150. It was afterwards kept in an outhouse at Blandfield Cottage at a rent of £6 yearly.

**  "Execution".  Edinburgh, 1823. Printed for William Johnston. Price One Penny.
On the National Library of Scotland website at  http://digital.nls.uk/broadsides/broadside.cfm/id/14644

Until the mid 19th century, broadsides (or handbills) were the forerunner of the popular press. Printed on one side of a single sheet of paper, they were designed to be displayed in public places.