The Earlston Hospital that Never Treated a Patient.


Many hospitals in the Borders closed their doors after many years of service to the public. One thinks of  Peel, of  Dingleton, of Sister Margaret Cottage Hospital in Jedburgh, of Gordon Fever Hospital and many more.


But one Border hospital,  four miles from Earlston,
closed without ever having had a patient through its doors.
Not surprisingly, few people know much about it today.

A hundred years ago, “infectious diseases” were a special problem, and the Borders had several Fever Hospitals where patients with illnesses like diphtheria or typhoid could be admitted. There were fever hospitals  at Gordon, at Newstead, at Kelso, at Selkirk, at Millerhill (near Ayton), and at Meigle, Galashiels.

The most feared infectious disease was smallpox, which needed specialist isolation nursing, and the Public Health (Scotland) Act of 1897 allowed rural counties to group together to provide smallpox facilities. The cities could create special hospital facilities as part of their fever hospitals, but in rural areas transport was a problem. A horse and cart had to be used, since the railways refused to carry infectious patients (or so the Medical Officer of Health for Berwickshire said in his 1894 annual report.)

And so in 1906,  several local authorities combined to establish the “Border Combination Smallpox Hospital”. The town councils of Kelso, Lauder, Melrose, Duns and Coldstream and the West and Middle districts of Berwickshire were involved. Four acres of land “at or near Brotherstone Moor” were leased from Lord Polwarth. Other people referred to “Marchfield, near Smailholm,” and to "Boghouse".   If, instead of turning left on to the Mellerstain straight, you go to the right and walk down the farm lane, Boghouse is at the end of that lane. 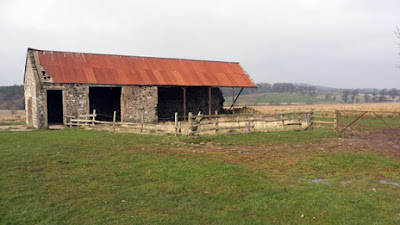 The site of the hospital today

The Minute of Agreement setting up the hospital covered the building of “a house of reception for convalescents from smallpox”, and the appointment of a Medical Officer, a Clerk and Treasurer, “and others as necessary” to be paid “salaries as the board think proper”. (The 1908 accounts allowed £100 for a nurse, a doctor and a servant.) It made orders for “the destruction and disinfection of articles such as bedding and clothing”, and the “horsage” of an ambulance.

It carefully worked out the costs of the enterprise – half to be paid by the local authority admitting the patient, and half to be paid by all the authorities on the basis of their populations. In the days when all other hospitals were run on a charity basis, it was important to establish who paid for what.

All the facts so far quoted are to be found in the archives at  the Heritage Hub at Hawick, as are rental bills for the hospital from 1919 to 1924. Beyond that, little is known for sure. I am told (but cannot be certain) that no patient was ever admitted to the hospital. When Earlston's Dr John Young was responsible for the establishment,  he would make regular visits, often taking his family for a summer country picnic there!

There is nothing in the records about a similar smallpox hospital for the counties of Selkirkshire and Peeblesshire;  there is nothing to confirm the rumour that the hospital was never used, and there is no indication of when the ghost hospital closed. 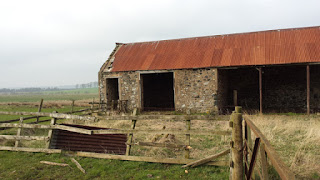 Another view of the hospital site today.

With thanks to  Dr. John Burns of Earlston, who contributed this article.

Auld Earlston would be delighted to feature further articles on the village's past  from other contributors.  Please contact:  auldearlston@aol.com

Gingham manufacturer,  renowned antiquarian and a popular Border fiddler - all the accomplishments of Thomas Gray. of Earlston, known  in his day variously as  "Gingham Tam",  "Tam of Earlston",  "Earlstoun Tommy",  and "A Modern  Thomas of Ercildoune". 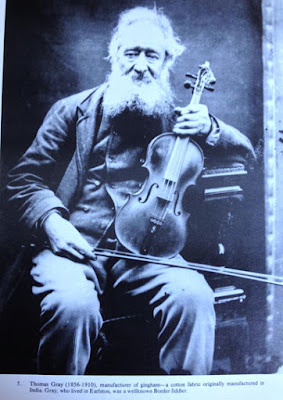 The photograph above  from  the Auld Earlston collection is captioned:
"Thomas Gray, (1856-1910), Manufacturer of Gingham - a cotton fabric originally made in India Gray.  He  lived in Earlston and was a well-known Border fiddler"


Often mentioned in connection with gingham production in Earlston are the Whale sisters, Christian and Marion, whilst  Thomas Gray  is a much less well-known figure.

Who was Thomas Gray?
The dates in the photograph caption  posed an immediate question, as no record could be found on the standard ancestry research websites of a Thomas Gray with those dates, and the conclusion is drawn that they must be incorrect.

The first record which offered some clue was an entry in the 1881 census which listed a Thomas Gray, a gingham manufacturer born in Earlston, unmarried,  and  living on his own at Kilnknowe Head, Earlston,  aged 85, so born c.1796.

Given Thomas's  late age, his death was soon traced and newspaper articles gave an indication of  his life and character. 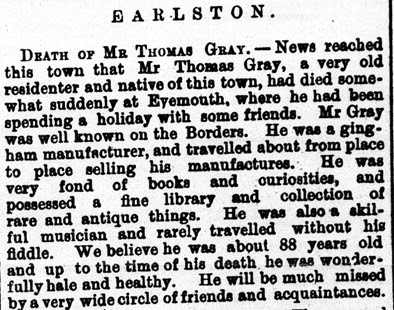 The death certificate was traced on the ScotlandsPeople website and gave the information that:  Thomas Gray, gingham manufacturer died on 5th January 1884 at Salt Green, Eyemouth, following a fall;   aged 88, son of Thomas Gray weaver and Margaret Runciman;  the informant was his nephew William Brown of Earlston.

An obituary in "The Kelso Chronicle:  1st February 1884 gave the fullest account of his life - in an article that first appeared in  " The Haddingtonshire Courier."

"With the passing away of his life,  this "ancient man"  and finely curious character, another link past and present  is severed;   and notably figures ceases from the round to long and faithfully trodden........ The family of which he was the last survivor  had some note in their day,  as manufacturers, in a small way, of ginghams;  and Thomas's chosen part was to traverse  the country distributing these wares. His beat at one time was quite an extensive one  embracing customers in the three Lothians as well as the counties on both sides of the Borders....mostly on foot,  he did not disdain a lift by rail.......His well known antique figure with a pack behind and the fiddle slung in front, was a familiar object in our streets....and his appearance never failed to excite interest."

Further research in the census returns, confirmed Thomas's itinerant lifestyle, as he was a frequent visitor to Haddingtonshire [East Lothian], described in every case  as a manufacturer of Earlston.    In 1851 he was visiting Margaret Nisbet, a 66 year old baker,  in Tranent';   in 1861 a retired farmer and his cousin at Long Yester, Gifford Farm House,   and ten years later in 1871  he was with a young couple Robert and Emily Brotherstone at Gifford.  The Brotherstone name  was well known  as blacksmiths. in Earlston and nearby Redpath.


Thomas was also listed as a gingham manufacturer in "Rutherfurd's Southern Counties Register  & Directory,published  in 1866, and in Slater's Directory of 1882.
Following Thomas's death, local newspapers threw further light on his interests, with references to the sale of his books and antiquities which took place in February 1884. 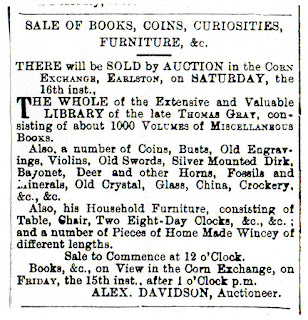 In July the same year, his property on Kirkgate was sold.

Fourteen years later, in  "The Border Magazine" of 1898, Robert Anderson of Edinburgh  wrote a tribute to Thomas Gray. 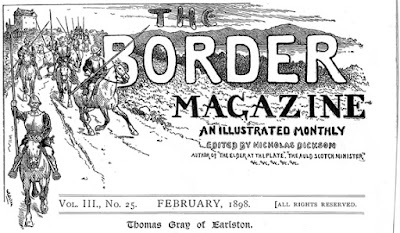 The author wrote that  Thomas went on


"his regular rounds with his pack and his fiddle to dispose of his ginghams, the quality of which was proverbial........Many a lady of high degree  did not think it beneath her to purchase a dress piece from the old worthy and to get in return a blessing and tune on his fiddle.

With only the early education which the parish school of that day afforded, he managed by diligent application to cultivate his intellect to such an extent that he became known in his own neighbourhood and far remote for his learning and intimate knowledge of  of the leaders in literature. He possessed upwards of 2000 books. .......His capacious pockets used to hold at least two or three favourite volumes,  on which he might be seen poring over  while resting by the way."


An Earlston street name sign reminds us of the village's past, in which
Thomas Gray
"this remarkable man and grand old Borderer"
played a part.

Much of this information was traced using standard reference material of census returns and directories, conducting a Google search and accessing searchable British Newspapers that are available online and feature Border titles:
The Heritage Hub at Hawick holds microfilm copies of old Border newspapers.  However these are not indexed and you do need to have a good idea of a date to search for a specific item i.e. month and year.