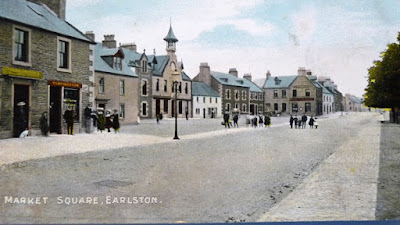 Gift of John Redpath Esq., Montreal
to his native town of Earlston AD1869"


Who was John Redpath?

He was born in Earlston in 1796, and apprenticed as a builder/stonemason to George Drummond in Edinburgh. In 1816 aged 20, he emigrated to Canada, landing in Quebec and walking the 160 miles to Montreal. John soon gained employment in the construction industry, witnessing the first installation of oil street lamps in the city. Within a few years he was able to set up his own company and became involved in prestigious projects that included:


John  built up a  reputation in the Montreal business community and was elected to the board of directors of the Bank of Montreal, the city’s leading financial institution; becoming vice-president, and a large shareholder.

Charitable concerns were at the forefront of his life. He supported Montreal General Hospital, the Montreal Presbyterian College, and the Mechanics’ Institute, all of which he served as a director. He campaigned to fight Montreal’s white slavery traffic and, working through the local Magdalene Asylum, to redeem “unfortunate females, many of whom are poor immigrants who have been decoyed into the abodes of infamy and shame which abound in this city.”

He  was principal founder of the Presbyterian Church of Canada,  helped establish the Protestant House of Industry and Refuge, Presbyterian Foreign Missions, the Labrador Mission, the Sabbath Observance Society, and the French Canadian Missionary Society to which he left a substantial legacy.


But John Redpath did not forget his place of birth.

"The Southern Reporter" of 3rd September 1868 reported on a public meeting in  Earlston Reading Room:
To formally receive a town clock presented by Mr John Redpath, Esquire of Montreal and to approve a plan of a spire to be added to the Corn Exchange to contain it. 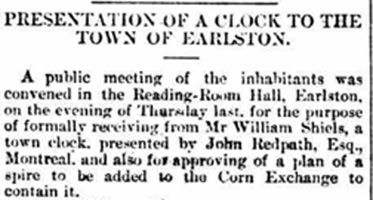 Mr William Shiel was called upon to give a brief outline of Mr Redpath's career, noting that:


"By talent, industry and perseverance a he succeeded in amassing a colossal fortune. He had not forgotten his youthful joys and toils and was anxious to do something for Earlston as a token of remembrance".


The offer of the clock was graciously accepted and It was agreed that a spire or belfry, be constructed above the Corn Exchange to hold the clock, at a cost of £70.

John Redpath died in March 1869.    He had seven children by his first wife, Janet McPhee, whom he married in 1818. Following her death in a cholera epidemic in 1834,  he married Jane Drummond, and they had ten children.

The clock given  to Earlston remains a significant landmark in the village today, thanks to the generosity of  John Redpath,
business man, philanthropist and industrial pioneer.


Postscript
The Berwickshire News and General Advertiser of 7th February 1939 reported that The spire crashed to the ground just before the final curtain was rung down on the pantomime "Simple Simon" presented in Earlston on Friday night. Spire Crashed to Ground Just befo-e the final curtain was rung down on pantomime Simple Simon,” presented Earlston Friday night,  The spire  smashed the wind screen of one of the many motor cars in waiting, but the car was fortunately unoccupied and no body was near at the time.

In Case You Missed - Read About Other Earlston Worthies: