The Unveiling of Earlston War Memorial 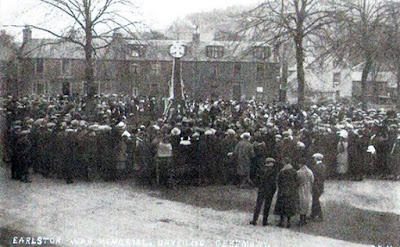 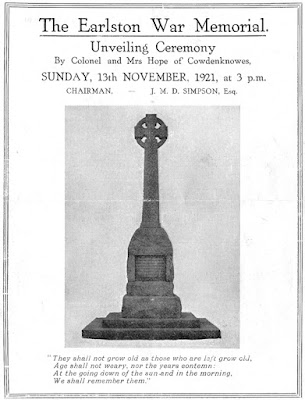 "The Southern Reporter" of 17th November 1921 noted that the memorial was designed by Galashiels sculptor Thomas Clapperton, and executed in Creetown granite  by Messrs G. Sutherland and Sons, Galashiels.  at a total cost of £650.  The report also listed  the forty-eight  men whose names were inscribed on the memorial,    the names of the fund raising  committee and details of the  service, including Colonel Hope's speech. 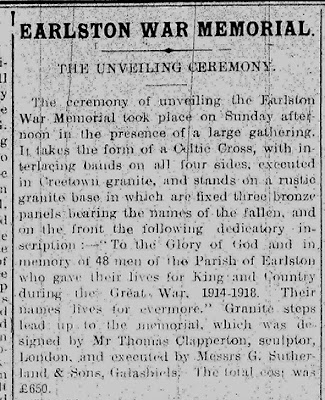 
"This Memorial which we are about to unveil, will keep the nenories of thos brave men always before the minds of those seeing it from day to day , or passing by it from time to time.  We are proud also today to see so  masny of those vsaliant men who went forth from this parish and have have been spared to rturn to their homes.  And now having all pulled together to win the war........ shall we not now all pull together to  win  the true peace and prosperity which  are so much wanted throughout the world after all the devastation of the war." 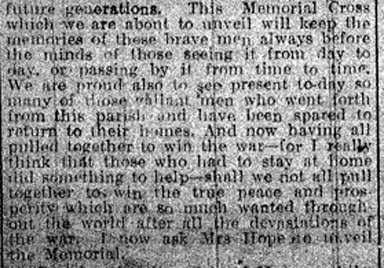 The memorial inscription reads " To the glory of God and in memory of the 48 men of Earlston Parish who gave their lives for King and Country during the Great War. Their names liveth for evermore".


Names of the fallen, as listed in the Dedication Service Programme (above)


Following the Second World War, a bronze tablet was added. with seven more names of those who lost their lives in the conflict